Skip to content
Press Enter / Return to begin your search.

Holy crap, how did this crop up so soon??! It’s only 2 weeks till the wedding now, so it’s the perfect time to have Kate try on the final garments and I can make a few tiny, almost imperceptible tweaks before I drop the perfected package back to her… or at least it would be, in a parallel universe where things work out just peachy the first time around.

But I don’t think I live in this peachy universe, because as it turned out I hit a few issues which meant showing Kate options to choose from, and of course that means I’ll have to implement the final choices after the fitting. Plus, as I was constructing the various pieces of this outfit it became increasingly obvious that the fabric was far too see-through. The facings and seam allowances were glowing through something chronic! But I decided to persevere, get a whole garment together to fit on Kate, and then find a solution to this issue along with any other changes we needed to make after.

So I knew we’d have a few alterations, some alternatives to switch in, and an opacity issue to nail… and I also knew I’d cut my two week contingency plan down to one week by booking a holiday. If I’m honest I wasn’t looking forward to this fitting.

That having been said, the outfit does look lovely 🙂 The design is perfect for her, the overall look of the thing is exactly what we wanted, and the alterations from the last fitting had gone well.

I’d added a dart to the top to control the flare in the hem while keeping the fit at the bust, but I still made up the alternative top option (no darts, more flare). Darts are staying, fit looks nice 🙂 So that’s one set of options dealt with easily. 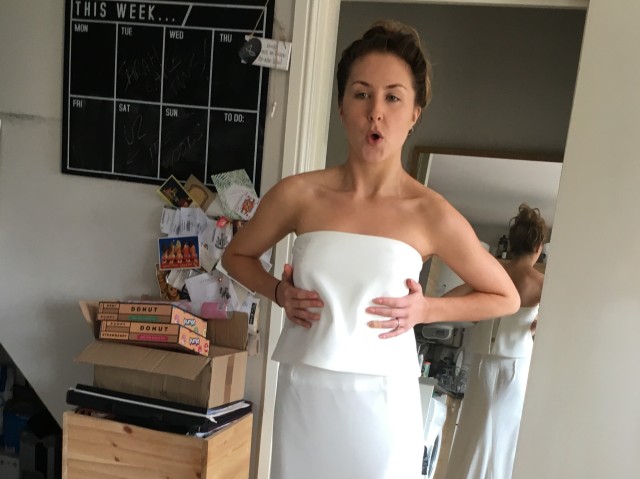 We’ve got a slight problem with a bumpy texture over the boobs, which is down to the seam allowance inside the corset layer needing a trim and possibly also some securing topstitches. And that’s another fairly simple win. 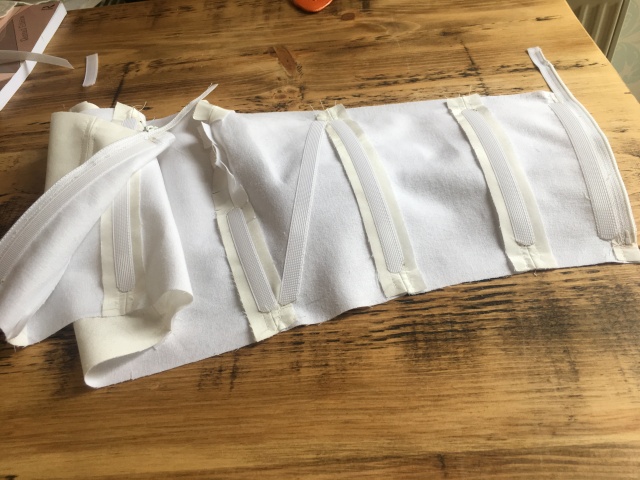 The skirt is sitting a little too low on the waist, leaving a slightly too big gap between top and skirt at the back. So there we’ll take in a little and it’ll sit higher, which is a wince more work but nothing too scary.

And then there’s the sleeve. I was disappointed to find that the darts felt bulky and left the hem a bit wobbly and chunky. It would be more normal to have a facing at the bottom sleeve, so there would be darts on the outside layer but not on the inside layer, just a smooth panel which attaches to the lining, but Kate really wanted the inside to also be in self fabric with no seams to show through, just an exact copy of the outer layer. So I made her up one sleeve as planned, but I made an alternative sleeve with the shaping from the darts moved into one convex shaped panel, so we have a horizontal seam instead. I thought the look would be cleaner, but maybe it got a little too stark.

After some discussion we decided to continue with the original darted design. Kate felt that it could do with a bit less volume in the bottom though, so we pinned quite a bit away. I’ll update the pattern accordingly and make up a pair of these new sleeves. We won’t see them on Kate for any more test rounds though, so let’s hope the smaller silhouette isn’t too risky at this late stage!

But the biggest issue to my eyes is the transparency. It’s tolerable, I suppose – she can wear virtually invisible pants and maybe in most of the photos you won’t see the facings – but that seems like a bit of a cop out. Up close the seam allowances look super ugly and the facings are not exactly offensive but shouldn’t be a feature! Instead of tolerance I’m going to take action. I’ll get some more fabric, fuse it, re-cut and replace the outer layer of the skirt and the top. For the sake of an extra days’ work I think it’ll be a vast improvement.

Plus it’ll be less inclined to relax into her butt crack.

Quite a few more things to do then, and not such a long time to do them in! I’ve called in my long suffering assistant (thanks mum) and written a list: it’ll be wrapped up and in the brides’ hand by Friday lunchtime.

So the next time we all see this project will be in the wedding photos!! Good luck on your big day Kate, and don’t forget to remove those sleeves before the soup course 😉 xx